Fairytale real or not?
For the longest time, I believed in fairy tales. Who wouldn’t? Who doesn’t like the idea of happily ever after? Finding true love? Experiencing that magical feeling called LOVE?
In my short existence, I found out life had a handbook, a manual that disperses all fairy tale crap, however, is it rarely used.
I’m not against a happy ending or ever after, not when movies show us it’s real, the nearest it is to live’s manual.
A child grows up with illusions planted in their brains about life, brainwashing the child and leaving out the most important lesson of all. Then life as the greatest audience watches amused by the illusion created with a million and one plans to completely shatter such illusions.
Have a crush, graduate, find a job, marry. In no particular order, these are implanted in a child’s brain, consciously or not, forgetting that there is a game-changer called LIFE.
There are pain, betrayal, depression, failure, frustration, disappointment, etc that acts as a catalyst to break or make a person.
I prefer a life talk with real truth as pain is inevitable, rejection as real as it can be, failure a pathway to success, etc rather than find the one who makes your heart skip a beat and all those lovey-dovey stuff.
Life is no bed of roses and as unpredictable as it is, pain as hurtful as it is should be spoken of, preparing a child, not create a surreal illusion that will eventually be shattered.
I wish I had known sooner. I wish I didn’t have a surreal illusion. I wish I was told the pain is real as love and both go together. I wish I knew fairy tales don’t exist.
I have lots of regrets about things I didn’t know and wasn’t told. Maybe it’s for a reason. Maybe its what made me who I am, that led to finding me and have a footing in life.
Maybe I wasn’t told of the other side of life so my innocence isn’t snatched away so early, allowing me to have dreams and experience purity before life taints me.
Childhood is where the fun is, a period of innocence and lack of responsibility, rebellion is seen as a passing phase.
Childhood is meant to be enjoyed, believing in fantasy and fairy tales.
Do fairy tales exist?
Is happily ever after real?
Is love truly magical?
I would answer yes without hesitation back then when he was my favorite chapter in my story.
Now, I believe being happy is possible, living each day happily like it’s the last.
One day at a time, till forever comes.

Mended Heart ~ a short story
Onye wandered aimlessly in the courtyard lost in thoughts. She was yet to make a decision after Ovie dismissed their divorce case. He insisted only she had the right to dissolve their union and not a third party. She was at crossroads, Ovie had beaten her up, partied all night and cheated on her. He filed for divorce when the truth behind his behavior was discovered. He had been a jerk because he had contacted STD from his female colleague during an office function when they both drank too much. END_OF_DOCUMENT_TOKEN_TO_BE_REPLACED

‘Caring is not always enough’ He told her angrily, veins twitching in his forehead, teeth, and fists tightly clenched. END_OF_DOCUMENT_TOKEN_TO_BE_REPLACED

I have always had an urge for something new, but never knew what it was.

Finding something safe was just like searching the wind and reaching for the stars I could never touch.

END_OF_DOCUMENT_TOKEN_TO_BE_REPLACED

For the longest time, I believed in fairy tales. Who wouldn’t? Who doesn’t like the idea of happily ever after? Finding true love? Experiencing that magical feeling called LOVE?

END_OF_DOCUMENT_TOKEN_TO_BE_REPLACED

A once carefree glee girl with an atom of worry, a daring attitude was taken away from life as she knew it to a different phase filled with obligations and opinions of the world, busybodies, gossipmongers, and zero survival tool. END_OF_DOCUMENT_TOKEN_TO_BE_REPLACED 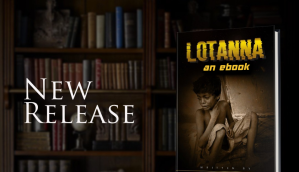 Lotanna – an ebook {a short read of society’s scorn, shame and stigma} is out, click here to download

Find me on social media

Gere Ochuko is an introvert to the core, extrovert on a page.